Compost toilets are quite common in a tiny house. Just like in ecovillages worldwide. You might be shocked if you've never heard of a compost toilet, or if you don't have all the knowledge about it yet. However, why should you choose a compost toilet?

In the course "Self-sufficient off-grid" I explain why a tiny house and compost toilet usually go well together, and why other wastewater alternatives are most likely to fail. Not only the why, also how a compost toilet works, user experience, a compost heap (if necessary), complete with photos and a schematic. This article, on the other hand, is a very technical explanation, so it may not be what you want to know right now. Again, don't be alarmed by the technical terms, in a lesson these details are only discussed if there is a need for it.

Every situation is different, and every situation has a different solution. Nevertheless, I try to point out differences between various solutions that exist for defecation. Correct handling of faeces is very important, because people get sick from bacteria, fungi and worms in their own faeces (not from urine, which I will deal with during the course). In the course of the previous centuries there were also several diseases due to unhygienic handling of faeces, however there are also examples where hygienic faeces were processed and the cycle was more closed. 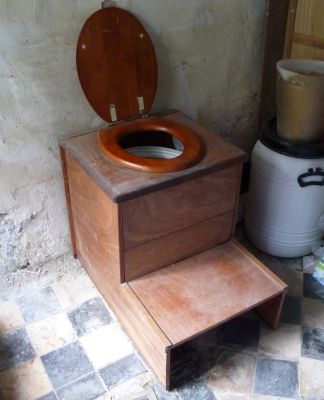 If you only use rainwater, you most likely don't have enough water for a flushing toilet. Depending on the size of your tiny house (say: 10.0 by 2.55 meters), you would already flush half of your water down the toilet (30 to 40 liters of the 60 liters of daily rainwater). With just rainwater you would have just enough for an average shower, so flushing half of the rainwater down the toilet is probably the last thing you want.

For this reason alone, a flush toilet is out of the question for a tiny house with rainwater harvesting. Because a flushing toilet is useless without water.

Bacteria and fungi like to grow while enjoying water (AW value), especially when the (outdoor) temperature fluctuates. In addition, bacteria and worms lay spores and eggs in water. It is therefore illogical to toilet in expensive filtered water, such as with a flushing toilet. You increase the health risk unnecessarily (without stools, wastewater cleaning is cheaper, safer and easier). The flush toilet used to prevent diseases and is therefore popular now, but adding water is actually increasing the problem and moving it to the treatment plants.

Just like a flushing toilet doesn't kill bacteria, fungi and worms, neither does a compost toilet - that happens in the compost bin (or compost heap, or the organic waste bin if you don't have a garden). How? With "time". Time kills everything. Within three months, 95% of the bacteria, fungi and worms, are simply extinct (and viruses harmless within about five months). The remaining 5% will become harmless in the year or two after that. Human compost from the compost heap (cold composting) is therefore only allowed after two years. Among other things, The Humanure Handbook by Joseph Jenkins contains tables with extinction times of bacteria, fungi and worms, and I will also show you that table in my course day.

Such precise data is unknown for a an IBA (Individual Treatment of Wastewater - see below) , here is the most common bacterium E. coli. In an IBA, bacteria and algae in the sludge break down the faeces, so that the amount of remaining inorganic substances is low (especially fertilizers such as nitrogen, ammonium and phosphorus in IBA 3B). There are no statistics on remaining viruses and bacteria. The water from an IBA can be "discharged", but never completely clean, because various bacteria and worms lay spores and eggs in the water, as mentioned.

A misconception is that a compost toilet would stink - if you add sawdust or bedding leaves after a major turn (for the right C:N ratio), a compost toilet certainly won't stink. A fan is therefore unnecessary, although this is included with more expensive models. Another misconception is that you are touching stool - that is also incorrect, because many models work with a pouch. Even when turning a barrel or bucket you really make sure that you don't touch any faeces. That's not so bad, because the compost toilet content is actually safer than wiping your derrière: the longer faeces have left the body, the more bacteria are dead and therefore the safer. 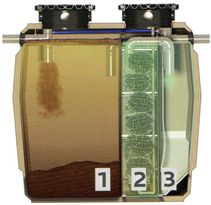 An IBA (type 3) and a helophyte filter both process waste water. A modern IBA system (type 3) is one or three (plastic or concrete) tank(s) with three compartments with a total volume of approximately 1000 liters per person, approximately 1 m2 per person surface, and requires electricity. A helophytenfilter -which I cover in more detail in my course- is technically also an IBA (and can be done without settling no flushing toilet) but works with an above-ground field of helophyte plants, approx. =_blank rel=noopener >1 a 4 m2 per person, and consumes ten times less electricity than an IBA. Both solutions are expensive, immovable and space-consuming. That is why it is best to construct tiny houses together (or for part of the residential area), such as now, for example, in Oosterwold.

The reliability of an IBA has historically been negative, with malfunctions (stench), and the not meeting the required criteria. This is logically because an IBA is much more complex than a helophyte filter. I assume that modern IBA systems do perform adequately.

Nothing wrong with the sewer you would say. Certainly not in terms of convenience. If you have a tiny house and you know that there is always a sewer connection, using the sewer is certainly easy. You can later decide (whether or not collectively) to take a more environmentally friendly approach.

As mentioned, you increase the problem of stool and hygiene if you mix stool with water. You can also express this in money. First of all, there are the social production costs of the 11,000 to 15,000 liters of drinking water per person per year in the Netherlands that we flush down the toilet.

Using shower water instead of clean water for the flushing toilet circumvents these production costs, only the sewage treatment remains (and the cycles are not closed either, see next point). From a social point of view, sewer treatment is also expensive and environmentally unfriendly with more than 800,000 kWh annual power consumption.

Costs for water purification and sewage processing are simply not necessary with a compost toilet and helophyte filter.

As the loser of the class, there is actually a very important argument at the bottom not to have your feces drained through the sewer or an IBA - which is sucked empty. We now use gas and oil for our crops to make fertilizer, plus we empty a number of mines for phosphorus. Neither can go on for ages. If we close the cycles with our own excrement, we can solve these problems relatively easily. The unsurpassed complete explanation of this story is by Kris Dekker.

The amount of manure in your stool is extremely small. You have more kitchen waste than feces. If you have a garden, a compost toilet (and the knowledge of keeping compost aside for 2 years and not using it with vegetables on the ground) is useful instead of fertilizer. But remember: you don't have a compost toilet purely for compost, because it produces very little compost.

In addition to artificial fertilizer, we also have animal manure in the Netherlands, which is a manure surplus. Human manure is nevertheless useful, because keeping so many livestock will not be possible for centuries to come. Dutch cows still largely eat soya beans from the Amazon, for which forests are constantly being cut down for our cow meat and milk. The forests from the Amazon - for the Netherlands alone currently 3.1 million hectares, almost the same size as the Netherlands itself- can no longer be expanded forever, this contributes too much to climate change. Fortunately, not wanting to contribute to this circus usually belongs to tiny houses.

To my knowledge, a compost toilet has no major drawbacks, except that you periodically have to put the bag from the compost toilet into the compost bin (or turn the barrel over and rinse). I do that myself once a year because I have a 60 liter barrel, which contains several centimeters of composted faeces after a year (2 people). Since a compost toilet does not smell at all, I never dread that job. I can well imagine that this job is a bit uncomfortable in the beginning, but it is really done in 4 minutes.

There are probably many more disadvantages of composting toilets, but those are relatively minor problems as far as I've seen and heard. I've heard stories from students about rusting hinges, and about smelly compost toilets if the urine/feces separation is not properly confirmed (often at festival compost toilets). When I mounted the urine container under the compost bin myself, the hoses kept coming loose in the beginning. As with anything, things can go wrong, IBAs can get really bad smelling, and an air leak in the sewage system smells really bad. Fortunately, everything can be solved.