Have you ever had your laptop break, and then you panicked? I had it last year. My super fast 1200 euro laptop was broken, and I had no access to my social contacts, company emails, course materials, website notes, half blogs, photos, contact with students, and much more.

In a panic, I bought a second-hand laptop that immediately stopped working, and so immediately another one. Both weren't that fast, but strangely enough I didn't mind waiting for half a second here and there. It sucks that the second also stopped quickly. Apparently I'm not the only one using his laptop until it's "on".

"I am completely paperless; I only have my passport on paper."

Still, this is a thing, such a laptop. I don't want to depend on one expensive thing at all. Moreover, I certainly do not want to constantly buy new electronics. After all -as I know from Babette Porcelein's book, and much earlier from the Story of stuff - the biggest CO2 and pollution impact is in..... stuff. So no heating, electricity, transport or food in your house. No: in buying new stuff. That's why I'm not a gadget freak, I don't collect old synthesizers, I don't even have a smartphone, and I haven't bought new clothes since 2010: I prefer to buy everything second-hand. Also for my house in Germany, as much as possible is second-hand, from gutter to piece of furniture. 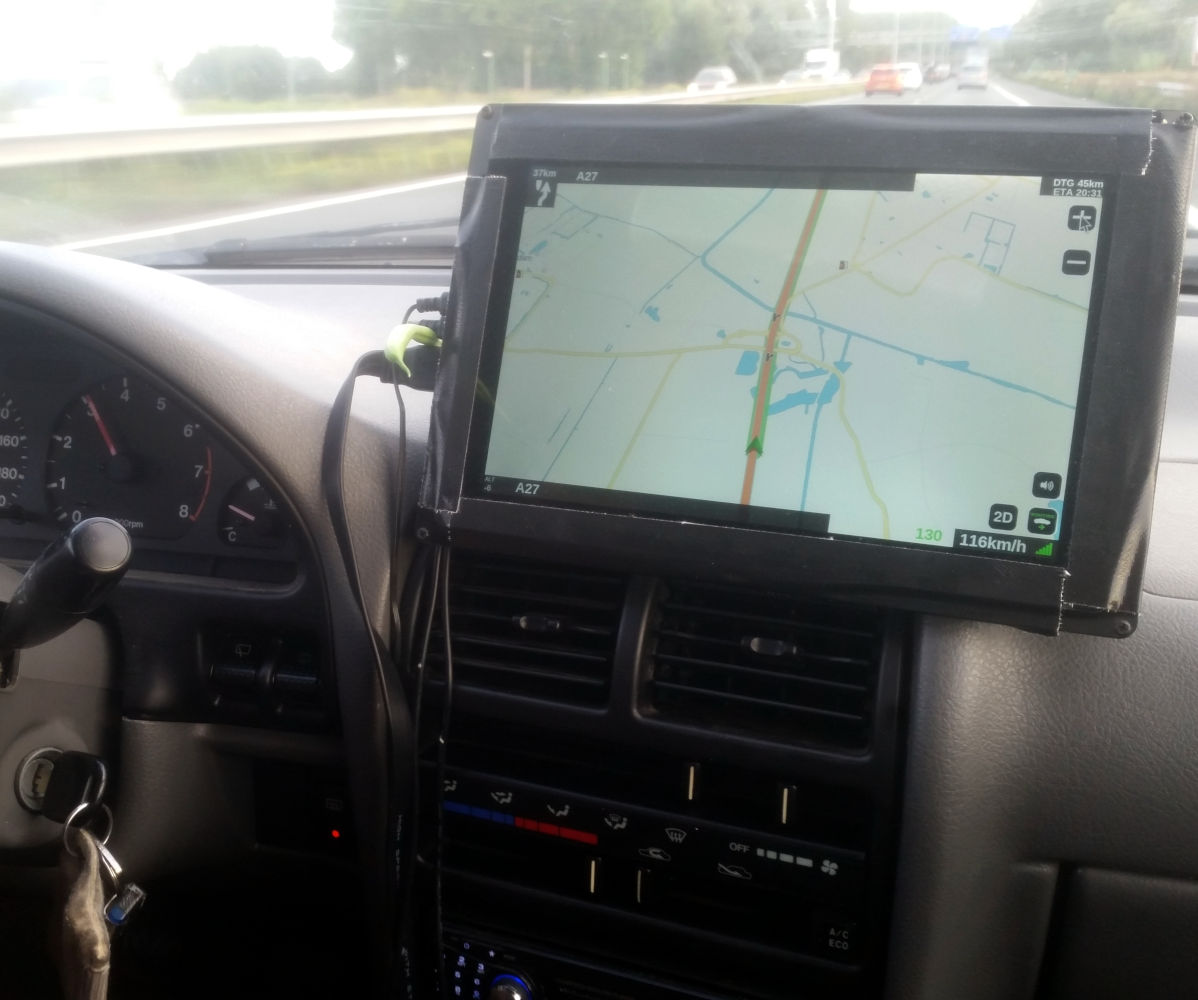 The "navigation" Raspberry PI as GPS navigation. Both the screen and Rasberry Pi are on 5V, so easily connected to the 12V of the car.

A Raspberry PI is a complete computer for about 40 euros, the size of a debit card. Coincidentally, I had used one at my old work, and what struck me right away is that I could do anything I wanted with it. The standard operating system is so similar to Windows and Mac OS that without reading a tutorial I could immediately edit my files, read USB sticks, use Chrome on the web, edit my files with LibreOffice, and so on and so forth.

Is using a small computer more sustainable or environmentally friendly than a larger laptop? As far as I'm concerned, the answer is "no". A Raspberry PI needs less power, but the electricity that a laptop needs is only a few percent of the total CO2 impact and environmental pollution that has occurred for one laptop. Really eco-friendly would be to keep going for years with the same laptop. A friend of my parents still does the administration with our Commodore 128.

Instead of one laptop, I now have a handful of Raspberry PIs in different places, hoping that this will last longer (laptops break from taking them everywhere) and remain affordable if one breaks. I equipped them all with second-hand keyboards, mice and monitors. It works about as fast as a normal laptop, especially with Raspberry PI type "4" (with USB 3.0) and an insanely fast Samsung V30 128GB SD card of less than 20 euros as a hard disk.

I am very satisfied. In less than an afternoon I configured the first Raspberry PI, and with one command I copied the configured "harddisk" (the barely filled SD card) to new SD cards, in short: all Raspberry PIs are configured exactly the same. 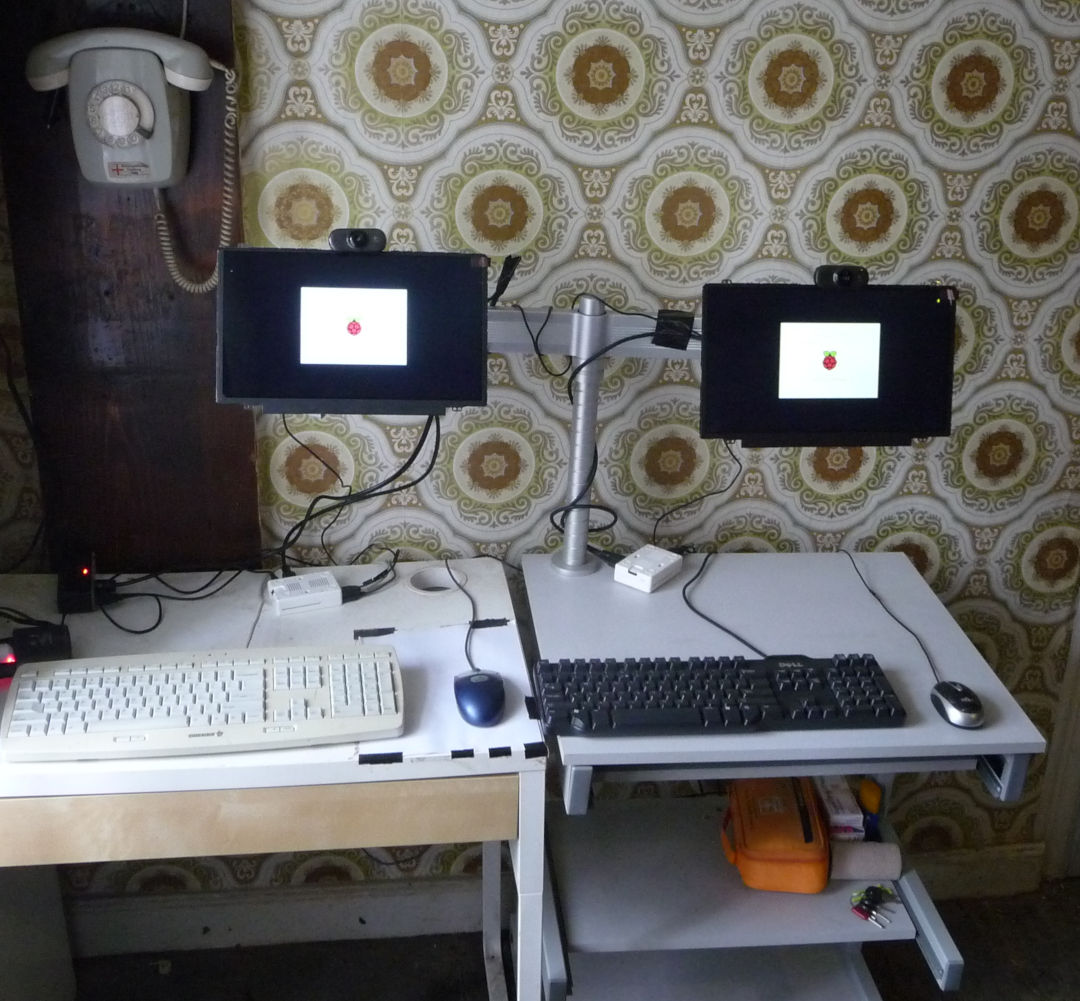 Two "workstation" Raspberry PI`s in Rorodt (I'm typing now). At home everything is 12V and the Raspberry PI runs on 5V, so that is easy to connect without an inverter.

In my case, that panic had little to do with "help, I've lost months of work!". I do not store anything on the laptop itself, and for that matter not online in a cloud. Where then?

I also want to be as self-reliant as possible in the digital field. I have a 3TB hard disk in several places in Europe with data that I don't need immediately: an archive. I update the archive when I arrive at the place.

Data that I do use on a daily basis is contained in a (Veracrypt 1GB) protected file on a USB microSD stick that I always have with me. This contains everything I do, including all official papers, all courses, all business administration and all course references. I am completely paperless; I only have my passport on paper.

To be precise: everywhere I work, I always keep a recent copy of this file, so that I have my recent data if I lose my key ring. 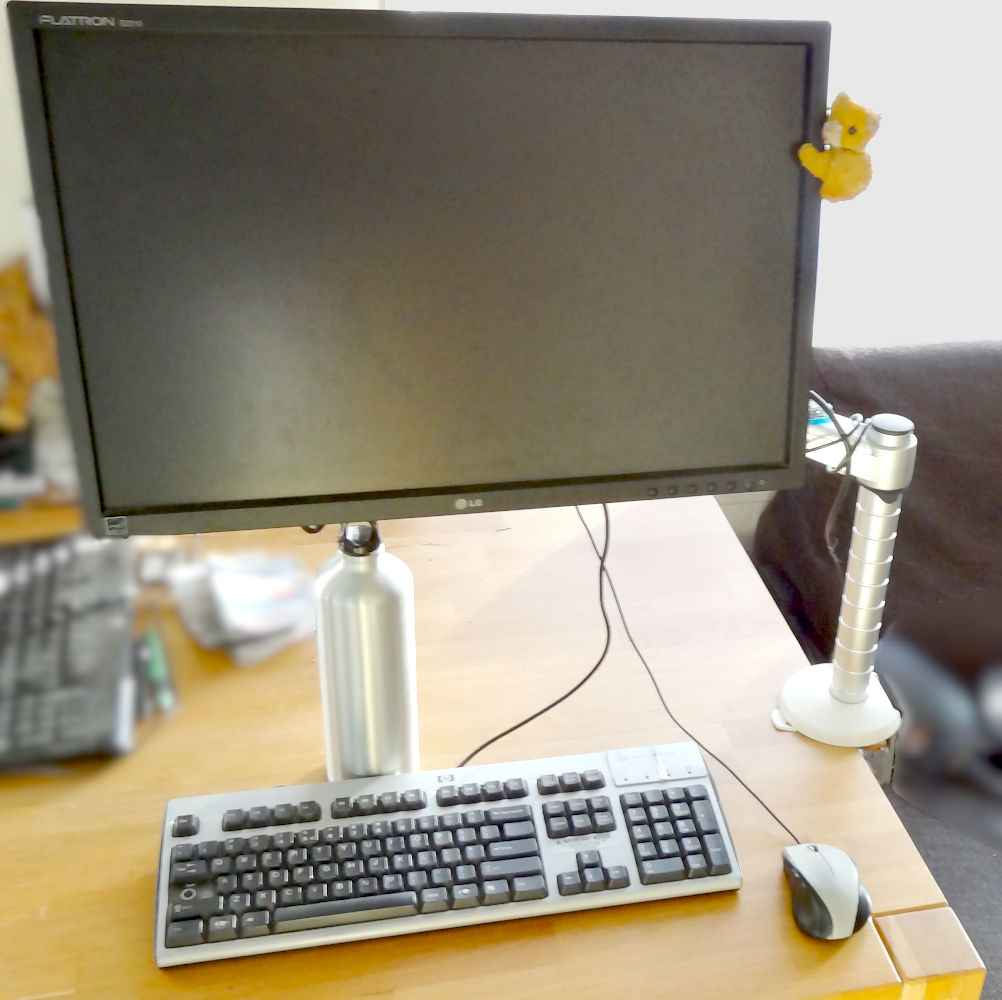 The "home" Raspberry PI, at least you can just see a part of the blue housing on the right. 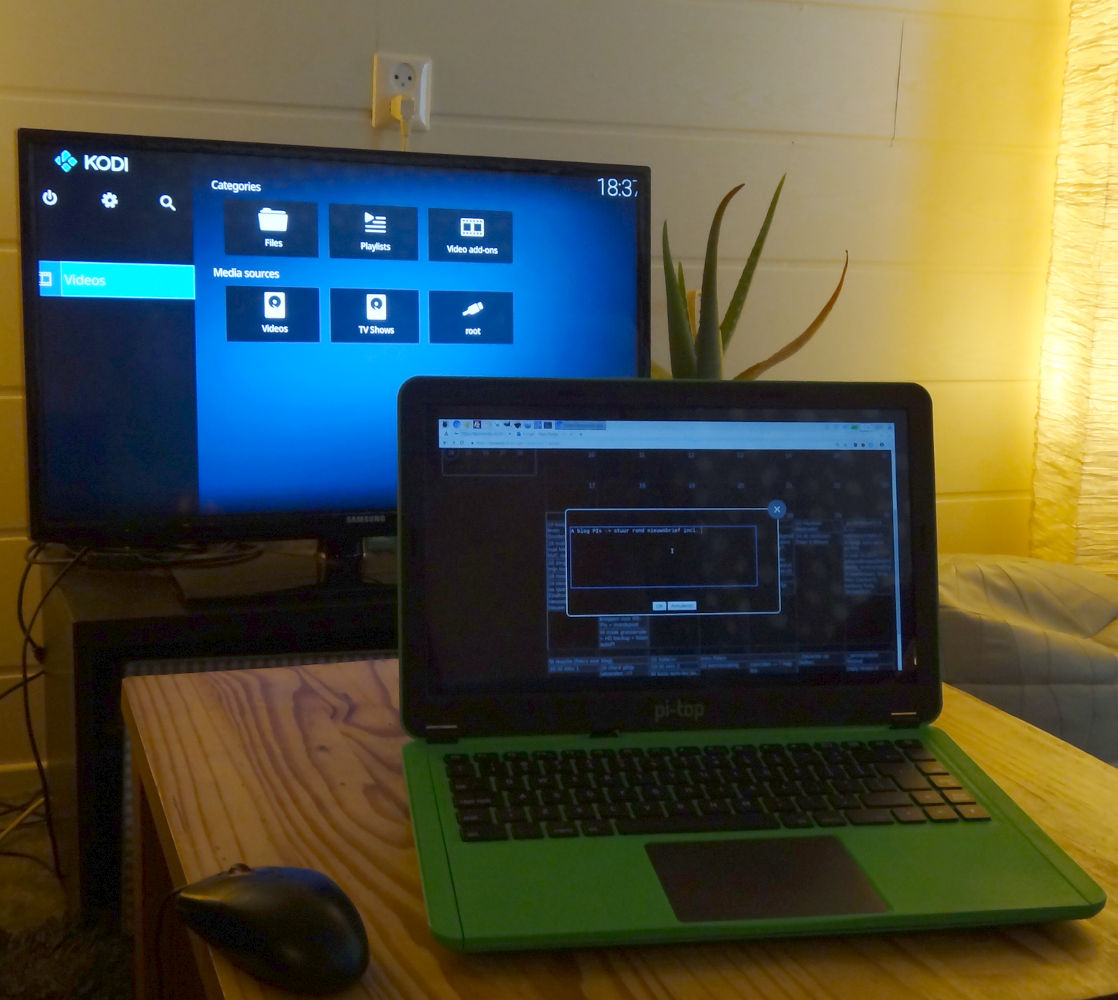 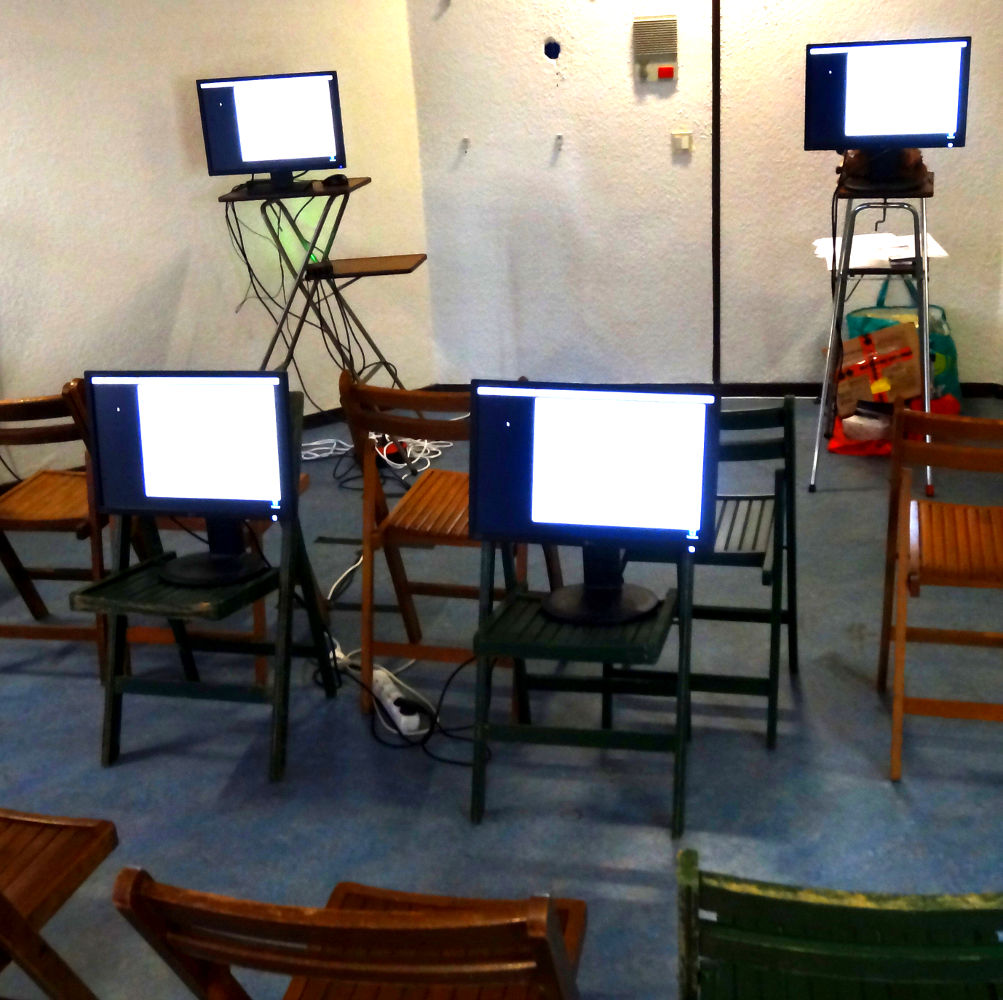 The "beamer" Raspberry PI in the classroom that controls four 22-inch second-hand monitors instead of an expensive beamer. 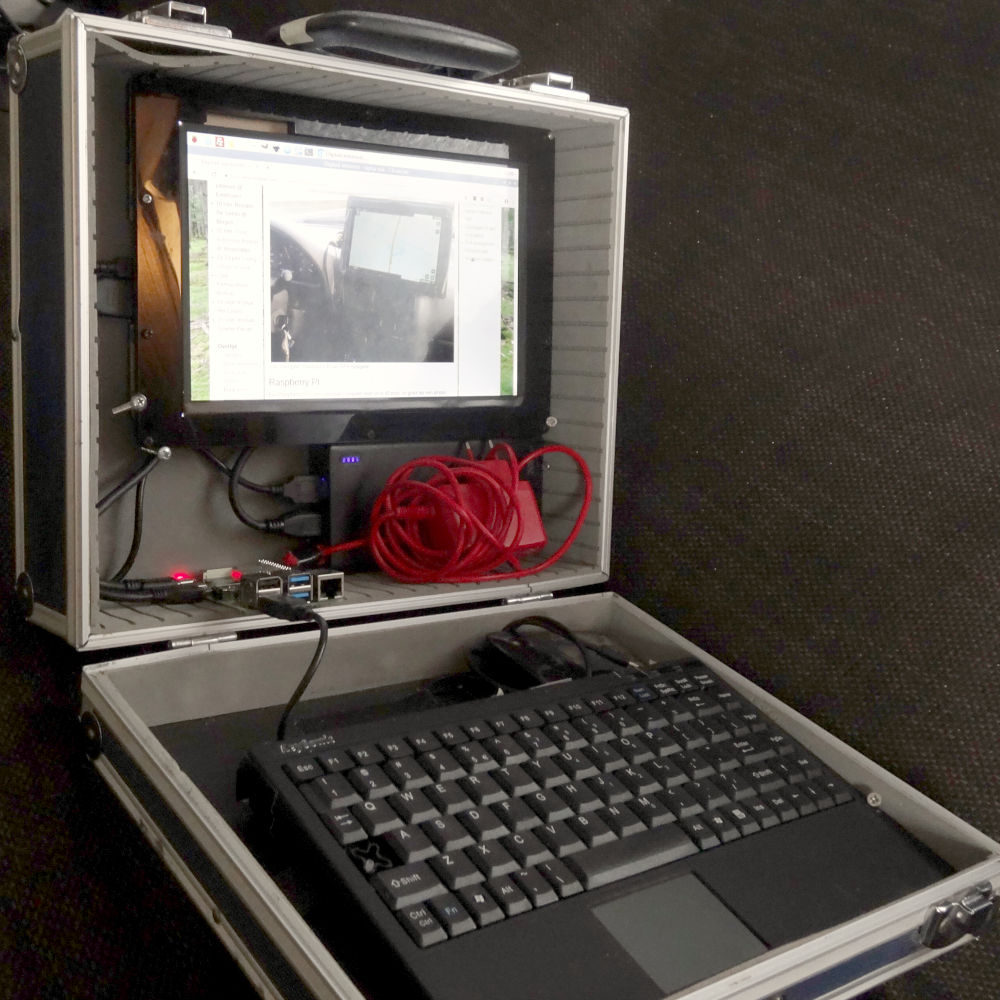 The DIY "suitcase-laptop" Raspberry PI since my father started using the green pi-top. 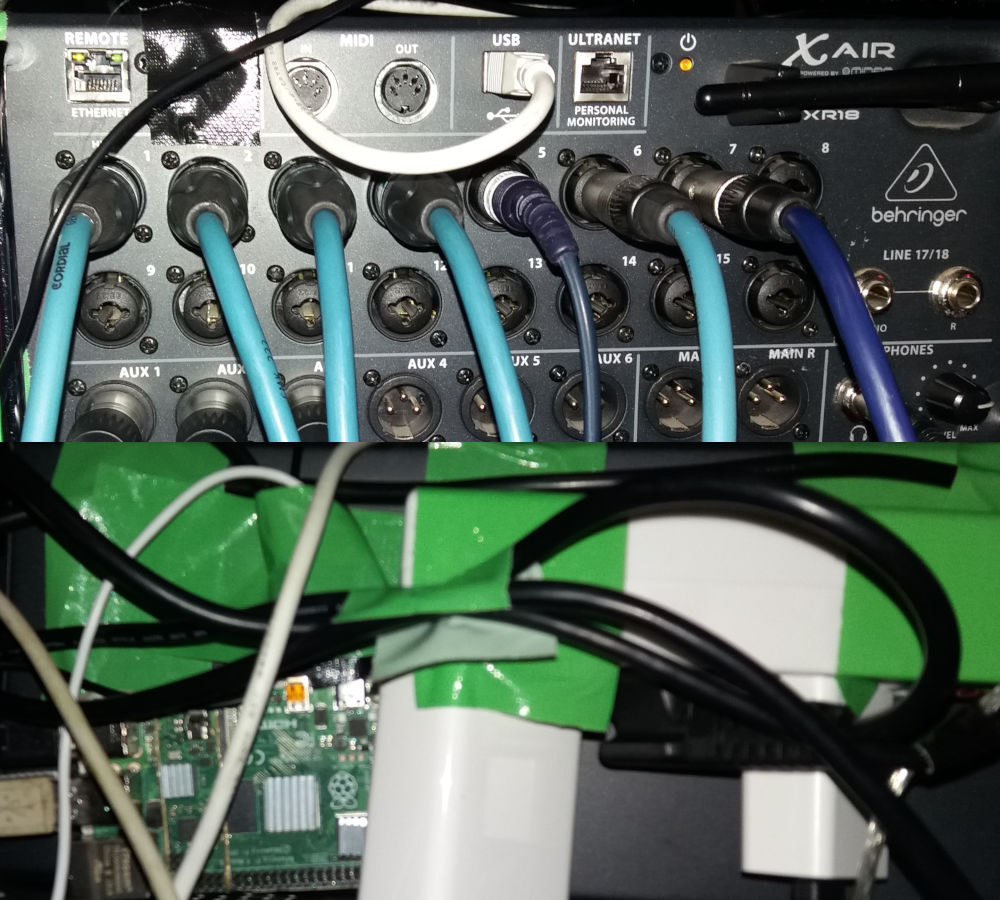 The "broadcast-pi" which is pasted on the back of a digital mixing console and with it broadcasts the live broadcasts (audio and video) of our band. 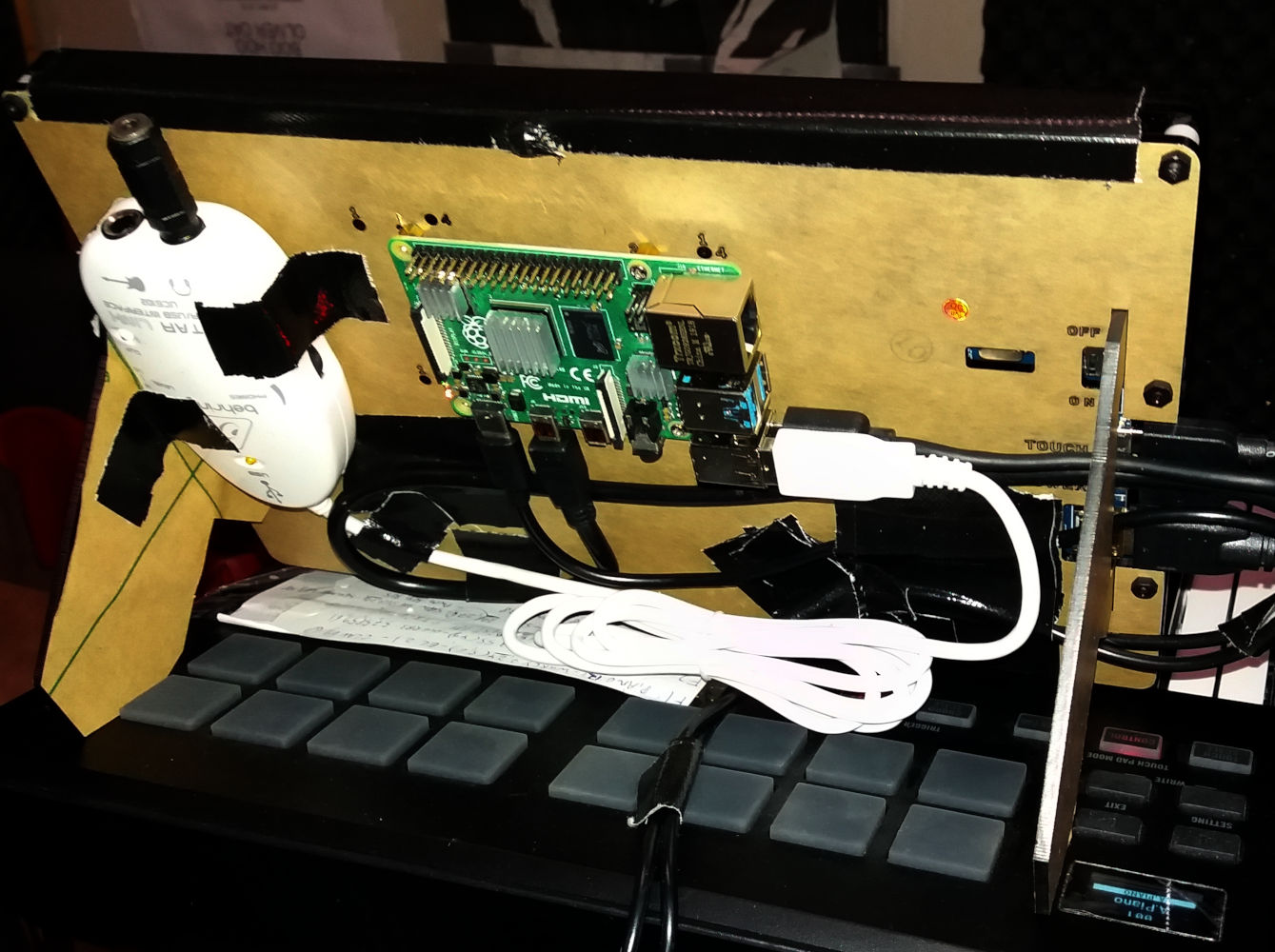 The "synthesizer-pi". A few gems of open source softsynths give me ripping analog synthesizers, Hammond organs and Wurlitzer sounds. A closely guarded secret is that the PI 4B with every sound card (for example, this one for 30 euros) has a latency of 8 samples (in other words: no latency. You CANNOT do that with a Windows or Apple computer!

I may also replace the delta controller in the solar water heater system with a raspberry pi. And now hope that everything will last for years...