p>Inside ten degrees. and two weeks later twenty degrees. How do you do that without insulation? The difference is only two taps. Not two taps against a heating element of the central heating, because there is not and will not be. What will come is wall heating. Wall heating needs a much lower water temperature (30 to 40 degrees instead of 70 to 90 degrees) and that is up to 30% more energy efficient. Wall heating also feels more pleasant because there is no air movement, but radiant heat, as we know it from the sun. There is now no heating and therefore quite cold in the house. 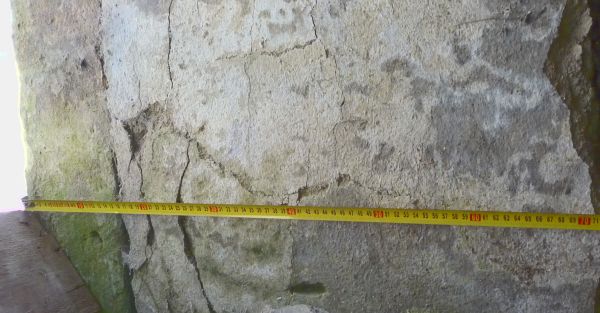 The walls are 70 cm thick, but offer little insulation.

Isolation is not there yet. Okay, the walls are 70 centimeters thick, made of huge chunks of slate held together with loam. You would say that such thick walls offer a lot of insulation, but unfortunately, that is not the case. The insulation value (lambda) of stone is so low that it does not matter how thick the wall is. A good sleeping bag insulates more than three times better (0.9 lambda compared to 3.2 lambda). 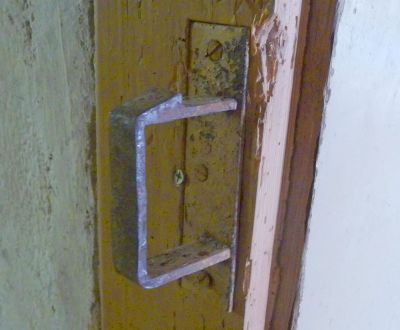 This is where the two taps were applied to.

Yet a while ago it was suddenly twice as warm inside. Then how is that possible. The answer is simple. One of the rooms on the ground floor has no window, and also an open connection with the woodpile room, which also has no window. The cold air literally flows in here at night. To keep the neighborhood cats out - all that cat hair on the couches... - I recently thought to close the door to that room so that the cats don't come in anymore. I did that with two hammer taps against the lever where the door handle falls. And boom: the draft in the house is gone, the heat remains inside, even with the lousy insulation now. This clearly shows how important it is to tackle drafts in the house first, before taking other measures.