Hydrogen is sustainable, right? If you follow a bit of sustainable news, you will see that more and more buses are running on hydrogen, as in Drente and Nijmegen. There is also quite a lot of subsidy, for example for H-vision in Rotterdam, province North Holland and RWE and The Green Village in The Hague. Hydrogen is also sometimes given to private individuals as a solution for storing summer heat electrically. However, it is unfortunately not that simple. At the moment there is little sustainable about hydrogen, because this will exacerbate climate change if hydrogen is not generated 100% with wind turbines and solar panels.

Suppose that car brand Tesla also makes buses, and suppose that you can drive all those buses electrically all year round with one windmill. If you then switch to hydrogen, that suddenly no longer works: you then need 2.5 wind turbines. Hydrogen costs a lot of extra energy. That in itself is not a problem if that extra energy is sustainable energy (windmills and solar panels), but now all hydrogen made from gas. Are you surprised that those buses use hydrogen at a Shell station?

There will probably still be enough coal-fired power stations and windmills to install solar panels in the next 20 to 50 years, before it makes any sense to store inefficient summer energy yourself electrically.

Sometimes it is said that we have a surplus of renewable energy, which makes it seem like we have a lot of renewable energy. Unfortunately this is not true. Only 7.3 percent of all energy was generated sustainably in 2018, and 60% of that is biomass. is the low hanging fruit of painted wood and excess prunings. In reality, less than 3% of windmills and solar panels are produced.

Why is there sometimes talk of a surplus of electricity? Because in Germany you get money for electricity for a few days a year (6 in 2015) because more energy is generated than can be consumed - solar panel lawns are never turned off in practice. This sometimes happens because on those few weekend days the large industry is not on and it is a sunny day. These are negligible surpluses: so negligible that the solar panel fields are not switched off (because that is of course also possible). Only if this is the order of the day, you could do something about it. We do not have surpluses in the Netherlands - there are still enough coal-fired power stations to switch off before we have a surplus.

Nowadays there is a lot of social discussion about energy storage. Just to be clear: you have two uses of storage: day storage and seasonal storage.

Day storage is not such a big problem. For example, a solar water heater is perfectly able to store the heat from the sun (in water) for up to a week so that you can take a warm shower for the rest of the week (efficiency about 95%). A normal (AGM or lithium) battery can also store energy well so that you can watch TV off-grid in the evening and even the day after (efficiency about 80-90%). The only issue with batteries is that a battery only lasts a few years and is extremely polluting (which is partly why it is better off-grid to have a huge solar collector system than lots of solar panels). Hydrogen is already unsuitable for day storage with an efficiency of only 40%.

The big issue, however, is that other variant: seasonal storage. Currently, there is actually no storage that can handle seasonal storage for off-grid use (see all the way down below for more details and links). If you live in an ordinary on-grid house, forget about seasonal storage anyway, because there are probably still enough coal-fired power stations to be turned off and solar windmills installed in the next 20 to 50 years. 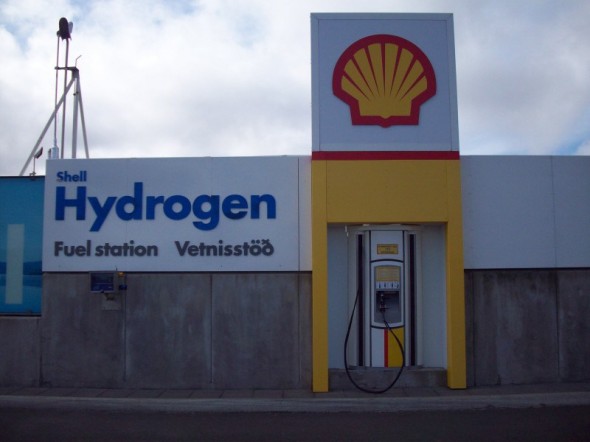 What not to do with hydrogen?

Heating in a private house on the basis of hydrogen does not seem smart to me: a heat pump is at least 300% to 400% more efficient than pure electric heating, and hydrogen is only 75%. Electric driving also has 3 times less energy than a "hydrogencar". The latter is apparently unknown to Audi.

In my course self-sufficient off-grid I calculate how much energy you need to be off-grid. That is always a great learning moment, for some students the most important learning moment. Of course you can store hydrogen for yourself at home, only then you really have to really being rich to have a horribly large roof in a house that you don't fully heat in the winter (or you have a private meadow with solar panels), and also such thick insulation that you can easily call your house a passive house. Even then there is a chance that you will fall short with your large hydrogen storage. Heating costs a lot of energy, and hydrogen is very inefficient.

Hydrogen is only interesting for large industries to generate enormous extreme heat in a sustainable way with green electricity, such as for steel and concrete (which we should and can get rid of anyway). That is why the industry is switching to hydrogen, at a faster pace than the addition of wind turbines and solar parks. Conventional batteries (and the new solid-state variants) are certainly not suitable for storing large amounts of energy for a longer period of time. The ideas below are probably a lot more sustainable:

The first solution is to look at the scale. There are various alternatives, such as: placing a surplus of windmills and solar panel parks in such a way that we as a society still have electricity left over even in the middle of winter. This self-sufficient alternative is the most ecological (assuming that we humans can use all the space) but the least economically because you get poorly paid for green energy if it is in abundance. Unfortunately, because it is the least economical, we are not going in this direction socially.

My favorite scaling solution on a societal level is swearing in the church: you hardly have an energy storage problem if you live with the sun. Of course you still need extra energy for winter heating, but if you use energy when it is available, you can really turn off coal-fired and gas-fired power stations. So I propose: large industry on during the day and off at night, a lot of activity in summer and less in winter. I do that myself: during the day I have the refrigerator on, and at night it is (automatically) off. In the summer I do electrical drilling and sawing, and in the winter I read books. I do laundry during the day, never at night. Here politics can take the lead: make electricity unaffordable at night (and in winter) and almost free during the day (and in summer). Only the climate veteran now dares to bring up "behavioural change", but here and there behavioral change - whether or not stimulated by financial pressure - can save the planet. The fear that we will have less luxury is still winning. However, behavioral change does not mean less luxury, at most luxury at a different time.

The most beautiful transport energy storage is absolutely not hydrogen and certainly compressed air. There you can run cars on it, with a similar action- radius like an electric car. No battery pollution, and very easy to charge with an ordinary compressor. If you ask me why we don't put a lot of effort into this socially, I have no answer for you, except for the fear that for a smaller action radius (oh my gosh, refuel twice as often). The TNO is conducting research into storage in compressed air.

The conversion of radiant heat to electricity and back means a lot of energy loss, so saving electricity for heating a season later doesn't work. Why not store the heat from the sun in water as locally and as directly as possible, such as in an extremely large solar boiler system? It can probably largely be done at home level with Summerheat, at neighbourhood level such as Ecovat and Hocosto do, and at residential block level such as prove students from Eindhoven with CASA 1.0. The coffee I now drink comes from my solar boiler system, which now has 500 liters at 95 degrees (beginning of October) ;), so I can imagine that storing this surplus of energy in water works fine.

Another way of storage where you store the heat directly at district level is the storage heat in Basalt, which can get much warmer than boiling water (450 degrees). In Ecovillage Boekel the CESAR system by Kees van Nimwegen is being built - here, however, electrical heat is first generated with solar panels. At the district level, Siemens Gamesa such a system in Basalt with warm air.

Of course there are also many storage and buffer methods that are more efficient than hydrogen, in a race to win for industry or as large-scale buffering for the electricity grid, such as iron ore and reservoirs. A somewhat low-tec-like solution is to store energy in weight on a large scale with gravity. I still have old brainstorming plans to lift a refrigerator as a battery in the shed, but reality catches up with me: Energy Vault and Gravitricity do just that. In my opinion, these types of systems on a large scale are perfect as a gas replacement to match supply and demand from the electricity grid.

It is very realistic to say that we will always need day storage. I'm typing this with pure solar power during the day on an off-grid system, but there's also a battery behind it for the lighting tonight. A lot is happening in the category of batteries, especially a new generation entitled solid-state and also batteries based on salt and bromide and hydrogen + bromide. The storage capacity and the price will determine the extent to which these batteries will be used on a massive scale for off-grid applications. In particular, seasonal bridging (to heat in winter with the energy of the summer sun) requires a huge amount of storage capacity, and, sorry, all these systems are very unsuitable for that. What good is a (currently unaffordable) salt battery of 3kW if you need 900kW of heating for the whole winter? ;) I wish you a lot of reading pleasure with this list of links I once put together (this is not exhaustive):